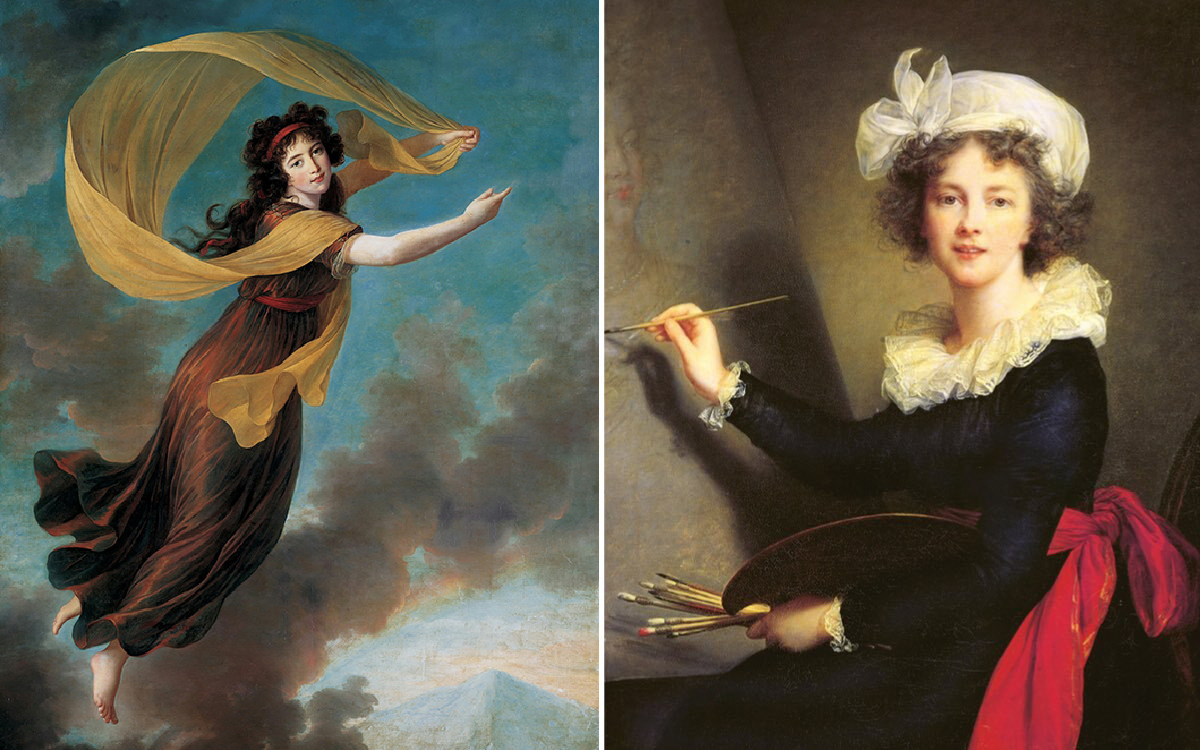 In her portrait of Karoline von Liechtenstein, Vigée-Lebrun conducted a radical experiment by depicting the Princess floating – and barefoot.

You can find the MAG/NET App in your App and Google Store. Download it and rediscover Vigeé-Lebrun's portrait of Karoline von Liechtenstein.

In October 1789, accompanied by her daughter Julie and her governess, Elisabeth Vigée-Lebrun boarded a stagecoach in Paris bound for Italy. Although she kept her face well hidden, she was recognized during the trip, as she proudly noted in her memoirs: she had exhibited her self-portrait at the Paris Salon, and the likeness of the sitter was, after all, the most important characteristic of a successful portrait. She was lucky then, that she reached the border before the warrant for her arrest was issued.

Elisabeth Vigée-Lebrun (1755–1842) was not traveling for pleasure. As the painter of Queen Marie-Antoinette and the French nobility, she had every reason to fear for her life. But as a member of the Academy, and a beautiful and charming member of Parisian society, she could hope for concessions and expect to receive commissions in Rome. And she needed these because what had begun as an escape developed into more than ten years of exile at various European courts. It was during this time that she celebrated the greatest triumphs as a portraitist during her long life.

It was during this time that she celebrated the greatest triumphs as a portraitist during her long life. The painter was not only enchanting in her appearance, Elisabeth Vigée-Lebrun was equally clever, skillful and hard-working. As a court painter to Marie-Antoinette, she had immortalized the Queen, who came from the House of Habsburg, in no less than thirty portraits starting in 1778.

While the unfortunate Queen was taking her last breath under the guillotine in Paris in 1793, the celebrated portraitist Vigée-Lebrun was painting two life-sized ladies in the imperial city of Vienna. These large formats, which the artist generally reserved for portraits of rulers, depict Princess Esterházy, née Princess Maria Josepha Hermengilde of Liechtenstein, and Karoline of Liechtenstein – the sister and wife of their commissioner Alois I, who had ruled the House of Liechtenstein since 1781.

The Prince was partial to the sciences and promoted the arts. He reorganized the Princely Collections and acquired more than three hundred works of art. He naturally also employed artists of his time. It is therefore not surprising that he enlisted the services of the much-lauded Parisian painter when, after several years in Rome and Naples, she stopped over in Vienna on her onward journey via Dresden to Russia.

In the third volume of the history of the Princely House of Liechtenstein published in 1882, it says: “Prince Aloys was a very benevolent gentleman, of whose kindness and gifts many spoke. In 1783, Prince Aloys had met Countess Sternberg’s niece, Countess Karoline von Manderscheid, whom he liked so much that he immediately informed his mother that he had decided to marry her. The wedding took place on 3 November of that year. Karoline was the daughter of Count zu Manderscheid-Blankenheim. She was born on 3 November 1768 and died on 1 March 1831, thus outliving her husband by many years. The recurring illness of Prince Aloys resulted in his early death, on 31 March 1805, at the age of only 45. The marriage had remained childless.”

While in this and other chronicles, the Prince’s merits in the arts – music, theatre, libraries, architecture, gardens – are highly praised, one learns nothing about his wife other than that she had been young and beautiful. She had certainly been young when she married, as she did so when she was only fifteen years old, and she was still beautiful when Elisabeth Vigée-Lebrun painted her ten years later. In her memoirs, the painter noted about Karoline that: “Her pretty face had a gentle and ethereal quality, which inspired my idea to depict her as Iris.”

Portraits featuring mythological guises were not common in the Prince’s collection of paintings. It is clear that he had given the famous French painter Elisabeth Vigée-Lebrun the freedom to portray his wife according to her taste. The golden-yellow shawl, inflated by a light headwind, and the weightlessly floating figure with the lightly shimmering face, the raised arms and not least the bare feet, lend a cheerful and optimistic tone to the entire painting. Karoline floats in the blue sky in the foreground. The painting’s background consists of a landscape featuring mountain peaks that are slightly veiled by clouds, and the black smoke that spreads diagonally through the picture from the lower left has quite obviously been caused by a volcanic eruption.

In earlier years, Elisabeth Vigée-Lebrun had been very impressed by the sight of Mount Vesuvius. She had captured the barren landscape in pastels and on canvases. In Naples, she had painted various portraits of Emma Hart, who later became Lady Hamilton, between 1790 and 1791. In one of these, she portrayed the spirited actress as a bacchant holding a tambourine in front of the smoking volcano.

Although the Englishwoman is only shown dancing as a three-quarter figure, it is clearly this model that the painter used again and modified in Vienna. The general enthusiasm of the time for the wall decorations in the Villa of Cicero in Herculaneum – which featured small floating dancers against a dark background, reproduced in sequences – may have encouraged her to detach the figure from the ground, which is unique in her work.

Delicately clad in the fashion of the time in a loose-fitting, reddish brown dress made of thin fabric, belted below the chest, which flows around her slim figure, Karoline looks as if she is floating away. Her full, loose hair is held in place by a lighter red band. The radiant yellow silk scarf is draped over her right shoulder and billows across her left shoulder like a sail filled with wind. The lovely face is turned towards the observer. The Princess is portrayed as the messenger of the gods, Iris – but the rainbow, which Iris personifies in classical mythology, is only faintly visible and partially obscured by the clouds of smoke in the bottom right of the picture. You almost have to look for it.

Madame Vigée-Lebrun explains that she had succeeded in creating a true-to-life likeness in a small anecdote contained in her memoirs: “The older ladies and gentlemen were outraged that the Princess was depicted without shoes, and the Prince told me that he had had a pair of pretty slippers placed under the picture and told her grandparents that they had just slipped off her feet.”

The daring experiment was thus successful, floating was accepted as a characteristic of the sitter. The painting resembled the model to such an extent that the difference between reality and portrait was almost eliminated. Eternally young, Karoline von Liechtenstein floats above the darkest clouds of past and present catastrophes – a graceful ambassador of fleeting happiness and eternal hope. 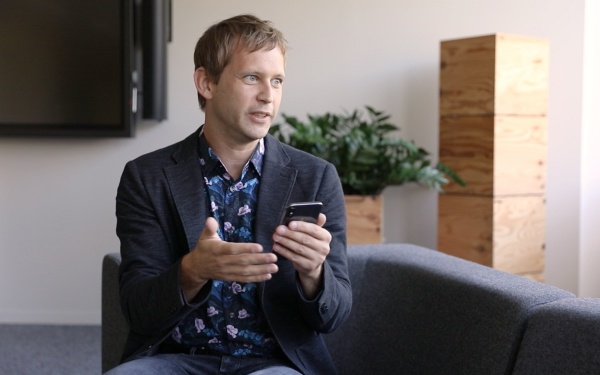 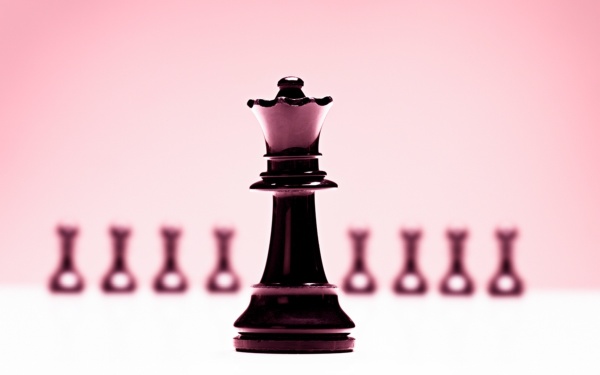 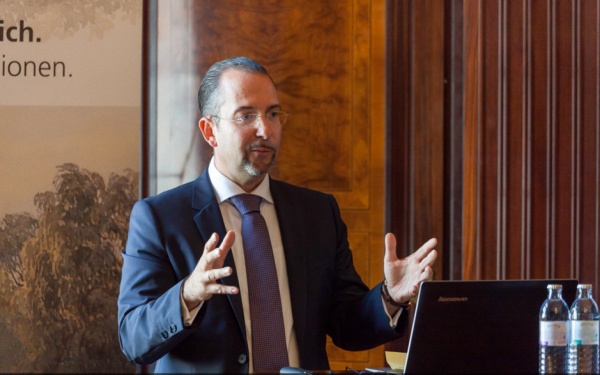