With regard to the development of the stock markets over the past four years, the USA is quite clearly in the lead. In the midfield, Japanese shares and - despite the trade war - Chinese shares have held their ground. For investors in European shares, but especially for investors who had bought British shares, a bitter picture must be drawn in the period mentioned. Whether this clear outperformance of US-American stocks is solely due to the political administration in the USA can be doubted with a clear conscience. 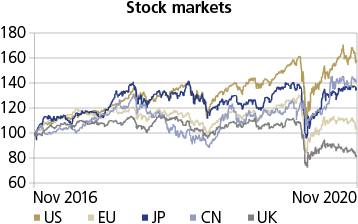 The development of the stock markets in recent years has de facto been influenced by a large number of factors: everyone is clearly aware of the Corona crisis, in whose second (Europe) or third (USA) wave we find ourselves. Especially in the context of the recovery in the second half of the second quarter and the entire third quarter of 2020, the US markets were able to outperform all other stock markets. This is mainly due to the sectoral composition of the US indices. In 2020, shares from the IT sector were in particular demand, as the business models of software companies with cloud services, streaming services, search engines and Internet retailers were particularly well able to cope with the effects of the lock-downs. These companies are almost exclusively based in the USA. Europe's German-based hope for a global champion in electronic payment processing has unfortunately gone supernova in 2020. In retrospect, Chinese shares were able to do well despite massive discussions about the trade dispute with the USA. The positive development of the Chinese manufacturing sector after the lock-down in the first quarter of 2020 has helped in recent months, with the UK unfortunately putting out the red lantern in this comparison. Not quite wrongly - the development of the British stock market clearly reflects the uncertainty associated with the endless tragedy known as "Brexit".

Donald Trump really has no easy relationship with the Federal Reserve. His Twitter tirades against Fed Chairman Jerome Powell are legendary - even though Powell was only brought into office by Donald Trump in 2018. But first to the facts: At the time he took office, the US prime rate was at 0.5%. The strength of the American economy and in this context especially of the US labor market gave the Fed  leeway to raise the key rate in 8 steps up to 2.5%. Jay Powell was guided by the dual mandate of the US Federal Reserve, which requires that both the employment situation and monetary stability be taken into account. The United States was on the best way to escape the zero interest rate trap by 2019. This allows a completely different picture to be drawn than that of the European colleagues. The ECB left the main interest rate at 0% during the past years, the deposit facility of the commercial banks was already at -0.40% at the beginning of the Trump era and was even reduced to -0.5% in 2019. Donald Trump has come out as a big fan of European interest rate policy over the last few years. Jay Powell was asked via Twitter to lower interest rates to 0%, following the example of the ECB. 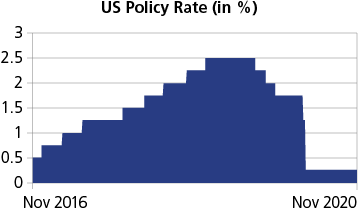 With regard to monetary stability, the Fed resisted this request for a long time. With good reason. After all, the independence of the central bank is one of the main anchors of confidence in a currency. Anyone who wants to see for themselves the effect of the dwindling confidence in a central bank's ability to act need only look to Turkey. President Erdogan's undermining of the central bank is a major driver of the disastrous development of the lira against the euro or US dollar. With the outbreak of the Corona crisis in the USA, the Fed massively reduced its key interest rates - in response to the extremely difficult situation on the labor market. Since then, there has been no public communication between the US President and the Federal Reserve. But perhaps it is also due to the fact that the 45th president has found new goals in the election campaign.

10-year yields in the USA have shown a mixed picture over the last four years. At the time Donald Trump took office, there was much talk of the great reflation. Extensive tax breaks for companies were intended to make it easier to repatriate foreign profits to the USA and thus stimulate the economy. Exactly this expectation is borne out by the development of 10-year Treasury yields. Starting from a yield level of around 1.8%, yields rose to over 3%, indicating expectations of economic growth and inflation. Statistically, these two factors are the only relevant drivers for long-term government bonds with very good credit ratings. At least as long as the central bank does not intervene on a broad front and buy fixed-interest securities on a large scale. 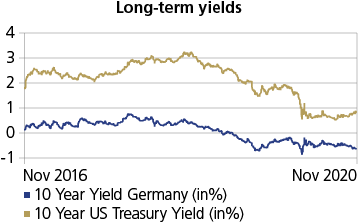 That is the path the US Federal Reserve has taken in the context of the Corona pandemic. From the second quarter 2020 onwards, capital markets were flooded with liquidity on a massive scale in order to ensure the proper functioning of the markets. This measure can certainly be explained by the still vivid memories of the financial crisis 2008/09. The market failure as a result of the Lehman collapse acted as a fire accelerator at that time and contributed to the full development of the financial crisis. It was precisely this effect that was to be prevented at all costs. The Federal Reserve's purchasing programs caused the US Treasury's 10-year interest rates to fall below 1% for the first time in the entire history of Wall Street.

In the context of the role of the United States in international trade, Donald Trump stands above all for an about-turn. For decades, the credo of free markets and free trade was shaped in the United States. As part of "America First", the United States went on a confrontational course with its major trading partner China and imposed high import duties on a large number of Chinese products. Can a reversal of the trend be identified based on the development of the US foreign trade balance with China? The answer here is a clear no. The only noticeable - and temporary - improvement in the foreign trade balance occurred during the lockdown in the United States in the second quarter. This is only because US private consumption collapsed during this period due to the lock down. 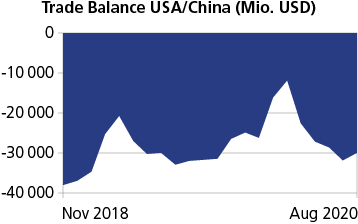 What is the conclusion? On the one hand, announced revolutions are not taking place. This conclusion can be drawn by looking at the foreign trade balance. On the other hand, the United States is still the economic engine of the world. Innovation and development take place primarily in this region. This development can be clearly deduced from the success of the US stock market vice versa with the other regions. Whether this is solely dependent on the political administration of the last four years? There are probably few indications of this. In view of the upcoming elections, the old stock market wisdom that political stock markets have short legs could come true.

Risk information/disclaimer: This publication is an advertising document. It is for your information only and does not constitute an offer, quotation or invitation to make an offer, a public advertisement or a recommendation to buy or sell investments or other specific products. The content is written by our employees and is based on sources of information that we consider to be reliable. However, we cannot provide any assurance or guarantee that it is correct, complete or up-to-date. The circumstances and principles underlying the information contained in this publication are subject to change at any time. Information once published should therefore not be understood to mean that circumstances have not changed since publication or that the information is still up to date. The information contained in this publication does not constitute a decision-making aid for economic, legal, tax or other consulting questions, nor may investment or other decisions be made solely on the basis of this information. Advice from a qualified professional is recommended. Investors should be aware that the value of investments can fall as well as rise. A positive performance in the past is therefore no guarantee for a positive performance in the future. The risk of price losses as well as foreign currency losses and yield fluctuations due to an unfavorable development of exchange rates for the investor cannot be excluded. It is possible that investors may not get back the full amount they have invested. We exclude without limitation any liability for losses or damages of any kind, whether direct, indirect or consequential, which may arise from the use of this publication. This publication is not intended for persons who are subject to a jurisdiction that prohibits the distribution of this publication or makes the distribution of this publication dependent on an authorization. Persons into whose possession this publication comes must therefore inform themselves about any restrictions and comply with them.