"I feel that Berlin is coming up at exactly the right time. Following the setback in Monaco, where we went home without any points in spite of a good race by Daniel and Lucas, the team's home round is the perfect place for a comeback," says Allan McNish. A look at the statistics underlines the team principal's statement: the Audi Sport ABT Schaeffler team went home empty-handed only on five race weekends in the history of Formula E so far – and at least one of the two drivers scored a podium finish in the next race. Allan McNish: "The good news is: everything is still open in the championship. With a strong result in Berlin, we want to make the battle for the title, before the then remaining three races, like last year, a real thriller."

The 2.377-kilometer circuit on the Tempelhof airport in the south of the city, that was shut down in 2008, is the venue for the tenth round of the season. In 1948 and 1949, Tempelhof was the airfield for the international Airlift through which the Allied Powers supplied the locked-in West Berliners with food and goods. 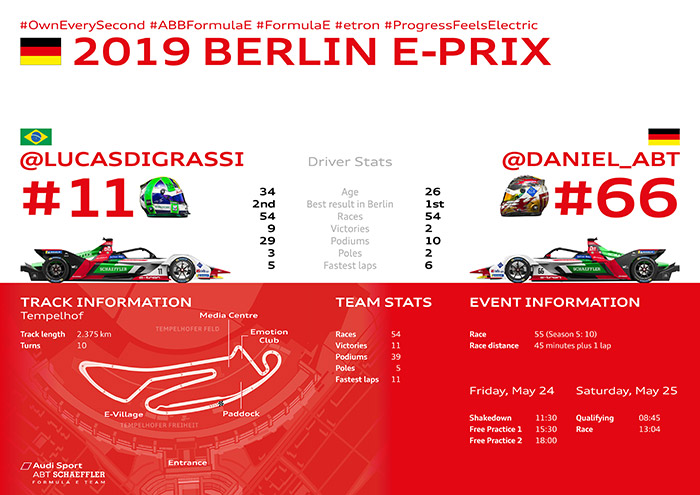 Last year, the fans witnessed a dream weekend of the German team: Daniel Abt first clinched pole position, then won the race in commanding style ahead of Lucas di Grassi, and also set the fastest race lap in the process. This maximum points result to be achieved by a driver pairing has been unique so far in the history of Formula E. Since the inaugural season in 2014, Formula E has raced in Berlin five times, four times at Tempelhof and once at Alexanderplatz. Daniel Abt and Lucas di Grassi scored a total of five podium finishes at these events.

"Berlin is like a cup match in the Bundesliga season for me: the race has unique significance and its very own rules. I simply feel comfortable in the city and at Tempelhof. The support from the many fans already gives me a boost before we even get to the track," says Daniel Abt. "All the positive thoughts from last season are still in my mind. Obviously, we’re all starting from scratch again on Friday, but even so: we know how to clinch trophies and win in Berlin."

This year, the unusual timetable poses a special challenge in Berlin: Because the race will already start at 1 PM on Saturday, the two free practice sessions will be held on Friday and the race day will begin directly with qualifying in the early morning. Due to the track still being dirty without previous practice sessions or a supporting program, this might mean that there will be an additional disadvantage for the first qualifying groups in which Lucas di Grassi (Group 1) and Daniel Abt (Group 2) compete.

"That the top five in the championship always have to qualify first is obviously tough, but makes for a mixed grid resulting in gripping racing," says di Grassi. The previous nine races this season have seen eight different winners. "Berlin is one of the highlights of the year for all of us: we have great memories of our one-two result last year and are looking forward to the support from many friends and partners. As far as the competition goes, I’m confident: we've got the performance to win races. A good qualifying and a clean race – and we’ll be in contention."

Before the tenth in a total of thirteen races, di Grassi ranks in fifth position of the drivers' standings, seventeen points off the lead. His teammate, Daniel Abt, sits eleven points behind him in ninth. Besides the Audi Sport ABT Schaeffler factory team, the Envision Virgin Racing customer team with Sam Bird and Robin Frijns also races with the e-tron FE05 that has been jointly developed by Audi and technology partner Schaeffler. The British team is currently in second position of the teams' classification.

The tenth round of the Formula E season in Berlin starts at 1 PM local time as a matter of exception and, as usual, lasts for 45 minutes plus one lap. As always, Eurosport will also be providing live coverage. All international channels, including broadcast schedules, can be found online at http://www.fiaformulae.com/. An entertaining video by Daniel Abt and Lucas di Grassi about the race in Berlin can be found here.